From the MK Outlier interview there were a few questions from you guys about the
one of the hardest things that you will face as a digital feature film maker. The job of firing people from your production. We have all pictured that we will get together a kickass cast and crew and production will flow smoothly. Sure we image that there will be disagreement or arguments along the way, but actually telling someone to take a walk is something that we dread. You will do it because there will be moments where you have to do it. 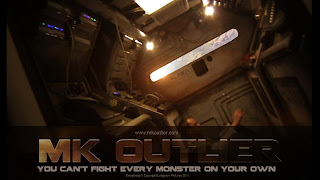 Here is my question and answer with Chris on the subject of firing crew members and a few questions on the shoot itself. The film did take over three years to pull together.

Were you shooting much footage during that time?

-We shot in fits and starts, depending on availability of cast, crew, sets and weather. Most of the film takes place during daylight hours, and we could only shoot weekends. The drought had just broken in Victoria where we live, and we had a very wet few years. Other factors included waiting for sets to be built, mutant costumes to be constructed. I moved house, and my girlfriend and I got whopping cough, which totally laid us low for months. Both Warren and myself started new relationships which also meant we didn't want to spend all of our spare time working. There were also plenty of times when I just didn't know the best way to proceed given all the balls I was juggling.
During the second year when we got sick, I got very down about how long it was taking. It's funny that you mention Bad Taste (my best friend and I used to watch this every weekend in High School) because it was when I remembered how Peter Jackson had taken a few years to make it that I stopped feeling so bad, and just decided that this time was my "film school". I decided that it didn't matter how long it took, as long as it was worth it in the end, and could be a career launcher. So far so good.. fingers crossed!


How did you manage cast members during that long of a time?

-Gently and gratefully! For the most part the cast were my friends, with little to no acting experience, so I cut them a lot of slack, but didn't put up with bad behaviour. I just asked them to look at it as a good excuse to hang out, and do something productive at the same time.
Whenever I hired someone, like our main actress, I ensured that we shot all of their scenes over a few consecutive weekends. This saved money, but also didn't drag out their time, so they could work on other things. I just assumed my friends were available all the time haha! If only.
We had some very long hard days early on, that were pretty trying on all of us, but after a while I just settled for shooting less and having more fun. I resigned myself to the fact that the movie was going to take a LOT longer than I wanted, and when I did that I was able to relax and enjoy it much more. This directly affected how I was able to deal with the cast and crew. If they weren't available for some reason, I'd just spend the time working on some other aspect of the production. I always asked for a few dates that the cast could make themselves available, and then we'd shoot if the weather matched. I was always polite, but firm, and made sure it didn't cost my cast anything to be involved, other than their time. Where possible I would transport them, feed them etc, and make sure that for the most part they were comfortable, and most importantly -- safe.
If they got pissed off, I just let them blow off the steam (usually in my direction) and then just asked them if they wanted to keep going. Usually they did. I think this also then gave them the confidence to know that I wasn't going to quit, even if they got angry, and I made it clear that I cared more about our friendship than I did about the movie. Basically I was just trying to say "I've got your back no matter what, but I do really want you to do (whatever crazy thing I was asking them on the day)".
It was much harder in the beginning when we just had rushes to watch, but after the first year and half I started to get a cut together and the cast were able to see how the movie was going to work, could see that I knew what I was doing, that I wasn't going to make them look stupid (most people's biggest fear). I think they also started to see that MK OUTLIER could really be a good movie, and even something they could be really proud of. This gave them a lot more confidence, understandably. Problems with cast can completely destroy a movie, which is why casting is so important to get right up front.-

Did cast members come and go? Did anyone abandon the project because of the time table?

- I only lost a cast member because she got pregnant. Other than that mostly it was me being impatient with people's availability, rather than the other way around. As I said, I made sure that anyone I was paying got their parts done quickly, but mostly that was just due to cost.-

You also said that you had to fire cast members. Most of us are terrified of telling someone that it is not working out. Does it matter if they are being paid or if they are volunteering?

-I've fired crew/VFX people, not cast members, but the same rules apply. This is a project that you're putting your blood, sweat, tears and probably life savings into. Don't let anyone f@#$ with you. Don't let anyone waste your time (unless you're getting an amazing deal!). Just don't put up with bad behaviour from people. This is a good rule for life, not just film making.
It doesn't matter if they're being paid or not. Yes, you can demand more from paid professionals, but generally you don't have to, because they're more productive. If someone isn't working out, get rid of them as fast as you can. This also helps set the ground rules for your shoot. It's not to make people live in fear (which is counter-productive), it's just to let them know that you're not f@#$ing around. It's fine to demand a lot from volunteers, or low paid people, but be grateful and find other ways to make it fun/and or rewarding. If someone volunteers to help you, then it is OK to expect them to actually help, and not OK if they don't, or get in the way.
I have only ever fired someone (basically on a no budget movie this just means never asking them back, but also can include telling them straight) when they were being detrimental to the movie being made, or just weren't on the same page. Some people don't understand what is required on set, how best to help, how to be flexible, or how to just do as they are asked. This is fine, but they have no place in your production. Do you really want to drive around and feed people who aren't actually helping you in some way? When you have 65 set ups to do in a day, you don't want to be arguing every point of every shot. This is just an exhausting waste of time, and is all about someone's need for attention, not your movie.
Don't ever make it personal, or a big deal. Don't be a dick about it. Not everyone is cut out for low/no budget film making! Not everyone will see your amazing vision haha. MOST people will just think you're crazy! I've had a few people, including relatives, be pretty brutal about this. This is fine. Any time you take on a massive creative project, you're going to really scare some people. That's not a bad thing.-

Again I would like to thank Chris Jacobs for doing this interview. You guys can thank him by visiting his crowdfunding campaign and getting involved. All you have to do is click here to get started.


Thank for visiting and please take a moment to share this post and or to stumble us on stumbleupon. Good luck with you projects. The next real post is going to take a week or two. I am going to offer something on using social media to market yourself and your project. The second part of the distribution post is coming and I am trying to get an interview with my favorite indie film maker. Also I am looking to add a page for showreels. Actors reels, for the reason that film makers visit this blog and finding quality cast member who will work for little or nothing is hard.

One last thing, I have a trailers page. I am about to add all new trailers so if anyone has a trailer that they would like to see me post you can contact me by leaving a comment or through google plus. Posted by rodney cannon at 9:57 AM