Horror Without CGI, The Sky Has Fallen

Horror Without CGI, The Sky Has Fallen 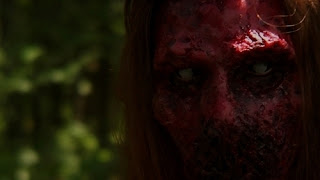 Today I am posting the first part of my interview with Doug Roos, the film maker behind The Sky Has Fallen, an award winning horror film that depend totally upon practical FX and character driven story telling. Before we begin the interview I wold like to direct you to his kickstarter page by clicking here and his website by clicking here  .

Before we get to the topic of Practical FX could you tell us what your film, The Sky Has Fallen is about?

-It's a post-apocalyptic love story. After the world's population becomes decimated by a new plague, people flee to remote locations, trying to avoid infection, but mysterious black figures appear and start experimenting on the dead. Now, Lance and Rachel, two survivors determined to fight back, set out to kill the leader of these figures before the rest of humanity is wiped out.-


You are doing a crowd funding campaign for your film. What are you hoping for with just a few days left?

-It'd be nice if we could get a few more backers, but I'm really happy with how the project has gone. I love Kickstarter and IndieGoGo. They've changed the game so much for independent filmmakers. They're an amazing way to help out other people. You can really help make someone's dream come true, which is a wonderful thing in a world too often filled with negativity and cruelty.-

I grew up a fan of visual effect because I grew up watching the work of Ray Harryhausen. His brilliant work in the area of stop motion should have carried over to the world of digital effects, but instead we have ended up with a George Lucas influenced world where just because it can be done with low cost software or even an iphone app it is done all the time. Why have you not taken the easy way out and instead embraced going totally CGI free?

-I also grew up watching the skeleton fight in Jason and the Argonauts along with all kinds of other incredible practical FX like Stan Winston's work on Aliens and Predator, Rob Bottin's unbelievable accomplishments on The Thing, Rick Baker's genius on An American Werewolf in London, etc. so all that made me absolutely certain I only wanted to do real practical effects, not computer-generated crap. CGI can be done well and look phenomenal, but often, it's overused with horrible rushed results. For example, CG blood. It always looks like sh*t, and there is no excuse for it since you can do squibs (or a weed sprayer equivalent), use a blood cannon, etc. For the kind of horror films I want to do, practical FX are always better, and that is all I'm ever using. I haven't seen any CG monster that came anywhere close to Bottin's creations on The Thing. People cite Jurassic Park as an excellent example of CGI, and it is, but what so many forget is that movie has a ton of practical effects to bolster the very limited computer work. Look at the sequel, and you can see what happens these days with them going completely overboard on CGI.

- I am a huge fan of the movie The Thing, I believe that it is Carpenters best film. The animatronics used back in the early eighties actually look more realistic than the CGI in the recent prequel. I also believe that it hurts the performances of the actors. They have nothing to react to. Did practical FX help to bring out a better performance from your actors?

-Yeah, the real shame with the prequel is ADI did a ton of mind-blowing practical effects that then got painted over with cruddy CGI although the story and the characters in that film were another monumental problem (you can't beat Carpenter's film and so much of the prequel is a pale imitation, copying scene after scene without going in its own direction). I think the Harbinger Down Kickstarter was a huge milestone in the fight against CGI, because you actually had Alec Gillis explaining how studios opt for CGI due to the tax incentives despite practical being cheaper, which is just absurd. But yes, I think practical FX also get better performances from your actors. Telling them to stand in front of a green screen and look at a smiley-face ball is ridiculous. Heck, I watched Movie Magic all the time as a kid. Seeing those guys make real monsters was the coolest thing to me. I loved that show. That's exactly what I want to do.-

I draw like a three year old wearing mittens so I have always envied those who can draw.
Are you story boarding scene by scene or down to shot by shot like Hitchcock was known to have done?

-I storyboarded every shot... it took about a year. Then I scanned in all my storyboards and edited them together into a movie with temporary sound effects, subtitles, and music. I put that on a DVD with some test footage and gave it to my actors and crew so I could show everyone what I wanted to do. I think storyboarding is very important. It's a huge help when you're filming especially if you're wearing a lot of hats.-

The look of the Zombie makeup is different from what I have seen before. Who was the makeup artist and did it turn out as story boarded it?

-We actually had a couple makeup artists. One was Nathan Shelton. I gave him my concept art to look at, and he sculpted the masks. The zombie whose upper lip and nose are disfigured he came up with all on his own. For the main creature with the creepy white eyes and no mouth, he followed my design, improving on it. He's an extremely talented guy who went on to work on Winter's Bone, which was nominated for four Academy Awards, and he did a ton of other projects too. The other key FX guy was Mike Strain. He did the effects for You're Next (in theaters now) and countless other films. Besides doing prosthetic application, he did the squibs on my movie. He's another insanely talented artist, and I'm honored to be working with him on my next project. I also did a little bit of makeup and some FX shots here and there, learning from Nathan and Mike when I could.-


When someone tells me that they have just seen a great horror movie I always asked them to tell me about the main characters. They usually respond with the name of the star if the star was an actual known actor. When pressed they fall back to character descriptions. The tall guy, the blonde girl, the fat guy, black guy, cute dark haired girl in shorts. You can tell that it was a quality film if the names of the characters stick with you after you leave the theater. Everyone who saw Aliens could point out Ripley, Hudson, Hicks and of course Vasquez. The idea that if the audience does not know the characters then they will not care whether they live or die has been lost in an effort to produce epically grizzly ways to dispatch then. Do you think that you have created characters that will be remember?

-I hope so. That was my goal. If you want to make a really great film, it's essential to create good memorable characters that people love and relate to or else no one will be invested in your story. If you don't spend time to develop your characters in interesting ways or they make stupid decisions all the time when they're supposed to be smart, you'll lose your audience.- This concludes the first part of my interview with Doug Roos. The second half focusing mostly on the film making side of the production of his film will be posted tomorrow.

During the next few weeks I am going to offer a post about using your social media to help to market your work and yourself. Remember you can and should be as much of a brand name as your film. Think in terms of Spielberg, Tarantino and Christopher Nolan. Also I am hoping to post my first ever interview with a actress film maker. The writer, actor/director is a completely different world, think Orson Welles, than being completely behind the scenes. That will be it for today.

Please take a moment to share this post and to stumble us on Stumbleupon.
Posted by rodney cannon at 1:39 PM