This is part 2 of my interview with Chris Jacobs, the film maker behind MK Outlier.

You can visit the website for the film by  clicking here 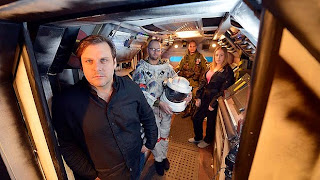 Did you write the screenplay and was it your first feature length script?

-I wrote the screenplay. It was my 6th or 7th feature script. The others were pretty bad! I work with a Hollywood Script Editor; Paul Young, who I get script notes from. This provides actual Industry insight, which is worth its weight in gold. Don't ever make a film without getting script notes, and addressing the weaknesses found. Script is everything! Blake Snyder's Save the Cat books also have taught me a huge amount, without all the bullshit.Gold.-

There are many ways to approach the subject of casting your film. Some film makers consider this an after thought. Others dwell on finding the right person for each and every role more than any other aspect of the film. How did you handle the casting your film?

-In typical low budget fashion I cast my friends in the major roles. This is just an extension of the idea that you only use what you have available, whenever possible. I wrote the parts with them in mind, so I knew what they could and couldn't do. So the characters just became slightly exaggerated versions of the real people, for the most part. I think the thing here is to match the temperament to the person as much as possible. That way you avoid those horrible "I don't think the character would do that" conversations. I did hire a casting director when the female lead I had cast got pregnant and had to pull out. This was a very interesting process. I auditioned 40 actresses over two days, on my own. It was like 40 first dates! Horrible really, because almost all of those people were able to do the part, but really only a couple were ever serious options. A few people really stood head and shoulders above the others. There were a few 'personalities' that I wouldn't hire if they were the last actors on Earth, but you get that. You are going to spend a long time, under potentially grueling conditions with these people. You don't have to love them, but you do have to be able to work with them. I reviewed the tapes and made the decision from there. You get a feeling on the day, but you need to review the footage. Casting is so important to get right. It amazes me that there is so much talk online about cameras, lighting etc. and everyone forgets that the actors have to be amazing to keep you engaged. If your actor sucks or makes production hell, all the megapixels in the world won't save you. I could write pages on this. You have to be a psychologist to some degree. A large component of Directing and Producing is people management. Honesty and Integrity are key, and don't be afraid to fire people who aren't working out. You just can't afford them. -


How long did it take to shoot the movie?

-We recently finished what I would call principal photography, so about 3 years. Maybe 4. We have only ever shot in our spare time, as we all have day jobs. This is one aspect I would never repeat. It was probably a good idea at the time, and has kind of worked for us, but there is a lot of potential for pain. We were lucky. In terms of time, I just looked at it as my 'film School' period, and thought if I can come out the other side with a feature, rather than a degree no one cares about, then I'm in front. I committed to it taking as long as it took, and just got into the healthy habit of laughing at people who asked me when it would be finished. If people start getting preachy about deadlines I start asking them for money! haha -

Special effects are an important part of sci-fi films. Who is handing the visual effects for your project?

-Yeah I'm doing the visual effects. It's a really fun area that I like being involved with, as it really directly affects the look and feel of the finished film. I have been able to outsource the rotoscoping component which is fantastic, and has really sped things up. I have a Fine Art background so I'm pretty particular about framing, colour and aesthetics in general. This is still a big work in progress, so watch this space. I recently showed a preview to a Sound Designer who was very impressed with the few finished effects shots, so hopefully we can keep up the quality with the rest. More sleepless nights! -

It looks like you are editing the film as well. Are you self taught like some many digital film makers these days or was there any formal training?

-I did do an editing course about 12 years ago, but can't remember much of what was taught. I also did a Directing and Cinematography Summer School which was fun, and helped out on other people's films. I also did some work with a commercial director which was great experience. I mostly learnt by editing shorts, docos and music videos, but I must say that editing is an art form that I don't pretend to have a mastery of. I have done all the editing so far, and we have a cut of about 1hr 50mins. Story wise it's fine, and is paced well, but I'm looking around for a pro to help with the final cut, perhaps as an advisor for a few days.- Also what are you using to edit? The system and the software? -Adobe Premiere and After Effects CS5.5 on a self assembled Intel i7 PC, 16GB RAM. We'll probably grade with Speedgrade too, when we get to that. Sound will be done in a professional studio, most likely on ProTools.- Now that you are nearing he finish line on MK Outlier what is it that you wished that you had known or prepared for before you started? -This is a tough one, as all the lessons learnt along the way are ones you only learn by doing. I wish I had never waited so long to get started, but I did. I'm just sorry I didn't have the confidence to back myself sooner. I think I did waste some time at the start worrying that people were doing me all these favours by helping me and that I could never repay them. The truth is whenever you do a big creative project and invite others to be involved you are the one doing the favour. Other people can help you, or not. That's their call. Either way is fine.-


Is there another project in the planning stages or are you going to put your feet up for a while?

-I am a projects kinda guy, and I always have several going at once, because projects are just the most fun ever! For now MK OUTLIER is THE project, and I just can't wait to get it done and in front of people. I do have another script that I'm working on in my secret lab. I'm VERY excited about it, but MK comes first.-

Any final words on MK Outlier?

-Good things come to those that pre-order! haha Thank you so much for your interest in MK OUTLIER. We can't wait to hear what people have to say when they see the movie.-

Thank you Chris for taking the time to do this interview.

I look forward to posting the trailer for the completed film and seeing it. Again if anyone would like to pre-order the film they can do so visiting   here .

Posted by rodney cannon at 3:39 PM