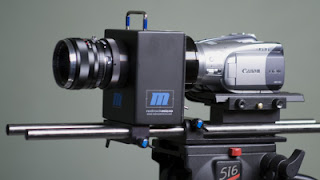 Thanks to The Canon Company and the digital camcorders and DSLRs there is an underground digital film revolution happening. This revolution began a few years ago when Canon decided to add the 24 frames per second option into most of its mid range consumer camcorders. Later it would at this as a video option in its DSLR and the revolution has caught fire world wide.
There are so many sites and blogs dedicated to DSLR cameras such has the Canon D7, Mark II and the T2I that I thought that I would go old school and focus on the cameras that started the revolution and with a few add ons can offer nearly the picture quality at a low price point. I will focus largely on the Canon HV series and the feature films that have been made with these little monsters and when the moment demands it I will get into some of the great work being done with the DSLRs.
Let’s begin with why should a low budget film maker consider these cameras. I would say in response that a low budget film maker should not and by low budget I mean if you have fifty thousand dollars or more to spend then you should consider using the Canon Mark II or the Red or a number of the Panasonic pro-sumer camcorders if you want to make a feature film. If you have fifty thousand or more why not go 16mm film. The film cameras are cheap and if you know what you are doing with them then go right ahead. The truth is that I am not here for the low budget film maker. I am here for those who are called ultra low budget or no budget film makers. You fall into this category if you have less than ten thousand dollars to spend on your first feature.
Allow me to describe you. You or a close friend have written the screenplay for your movie. You will be doing this project with the help of friends and family who will work behind the scenes for no pay. You will be shooting on nights and weekends and at locations that you can get for free or get in and out of without being caught filming there. Your actors will be paid little to nothing up front. You will be looking to get the best production value out of the least amount of money spent possible.
In other words you are a lot like me.
You are only willing to pay for what is absolutely unavoidable. The three area where you are going to have to spend money are:
Sound, if your audience can not hear the movie then you are doomed. Viewers will give up on your project the third or forth time they have to mutter what did he just say? Huh, What was that?
Editing, you may be able to use a free program, but you will need a computer strong enough and quick enough to edit and hopefully do some sound mixing on. If you have such a computer cool, you just saved money.
Camera, you need something that shoots in HD digital and shoots at 24p. Why 24p? That is the industry standard. This is the frame rate that gives you that motion picture look. You are going to have to spend some money on your camera. Money on the lenses and in most cases on a depth of field adapter.
The cameras are why we are here and let us talk about what to do and not to do. Get the best camera at the lowest possible price that will get the job done. Do not blow half of your production budget on your awesome new camera. It will feel wonderful to have that expensive camera and muse about all the things that it is able to do until it is day 12 of shooting and you have no money to feed your cast and crew. You have no money left for transportation, (gas money) and you have just realized that you should have set aside at least a third of your budget for post production cost. Treat your camera like the tool that it is.
A camera is not jewelry. It is not a diamond ring. It is a tool. You could consider it a hammer or a shovel. I think of mine as my axe. Like a good guitar it can make beautiful music if I tune it just right. Let’s talk about the tool you will buy and look at how others have used theirs.
Posted by rodney cannon at 7:33 PM