SCREENPLAY, THE DREAM VS. BUDGET REALITIES

SCREENPLAY THE DREAM VS. BUDGET REALITIES

You wrote a great screenplay. You were dying to go out and shoot it. You sat down and did a budget breakdown and discovered that Guy Ritchie would think twice before blowing that much money. In other words you are a low budget film maker, but you wrote a big budget screenplay.
This has happened to us all.
The thing that you are going to have to do is set it aside until you can afford to make this film and go about writing and producing a film or two that will help you to raise the money for that script.
You are going to have to learn how to write a low or micro budget screenplay. The problem with this is that most film makers only have a few clues as to how to do this. Limited locations and limited cast members is part of it, but not the whole story. Because if you are not careful you will limit yourself right out of writing a quality screenplay. Instead you will end up with a film that looks and sounds like it was paid for with food stamps.
The rules of crafting a great script does not change. In fact you have to focus more or these fundamental rules when writing your low budget screenplay.

This is a chapter from my new audio book on screen writing. If you have an audible account or a kindle account you can easily check it out there. Also available on iTunes.

You see that writing a low budget screenplay is not enough. You need to write a quality one. When I started this blog many years ago I wanted to help other film makers while learning as much as I could along the way. I love movies and want to see better and better stories being told. If you go back in time to the 1930's and 40's then jump to the 70's it seems like people did know how to make great films, but since then the secret of steel was left on the battlefield. It is time to get back to making great movies again. Great movies begin with a great script. Over the next few post we are going to talk about writing. 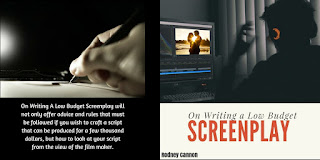 Posted by rodney cannon at 8:34 PM