Digital Film Updates and my Ebook

Digital Film Updates and my Ebook

This will be a quick post to update you guys on a few campaigns , upcoming topics and my newly released ebook.

First we are going to take a quick look at a new crowd funding campaign for the sequel to The Joker Rising. The film maker sent me the trailer a few days ago and I am sorry it took a while to get it up online.
For those of you who have not seen it, The Joker Rising is not only one of the best fan films ever made, it is one of the best micro budget films ever made. I am going to include the finished film at the end of this post. Check it out and see what you can produce with hard work and less than five thousand dollars.


This is short film that caught my attention and I hope to get and interview with the film maker for a future post.


Arrowhead: Signal from Arrowhead: The Movie on Vimeo.


It is a shameless plug time. I have published a new ebook. It is a collection of interviews about and basic lesson on digital film making. It is a great little book and would make a nice xmas present for the aspiring film maker. The title is On Low Budget Filmmaking, Digital Film Making Interviews. You can find the ebook version at Amazon and B&N right now. The paperback will be available on Amazon in December. You can buy it at amazon by clicking here.  Or clicking here. 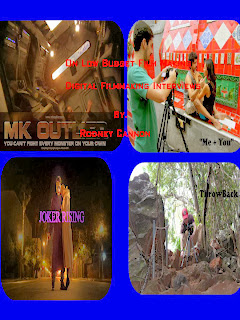 One more bit of business if you are a sci fi fan you are aware of the fact that this week will concluded with the 50th anniversary of the series Doctor Who. I a a huge fan of the original version of the series. I have seen every episode of the first seven doctors. Doctor # 3's episode Inferno may be the best pure sci fi episode of any tv series ever done. Okay I would like to post this doctor who short done by the producer of the series, his way of prepping every fan for what is coming Saturday. Its a really good little film, if he had gotten rid of the sonic screwdriver it could have been perfect.

Okay that will be it for today. I have posted the complete version of The Joker Rising below. If any of you have a topic you would like me to cover please contact me by leaving a comment of joining me on google plus. I received the request for a steam punk post to be included in the upcoming sci fi series of post and I am working on it.

Posted by rodney cannon at 4:37 AM