After seeing the fantastic short sci-fi film Clandestine and seeing the great behind the scene video that film maker Aron J. Anderson shot I wanted to interview him. This interview begins what will be a series of post on the subject of sci-fi film making. 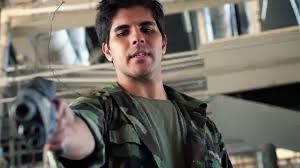 So many film makers have been told that sci-fi is out of reach because you need millions of dollars to make an impressive film. Those who say it and those who believe it do not truly understand what great sci-fi involves. If you believe that the remake of Total Recall or the over blown retooling of the Star Trek Franchise is great science fiction then you need to go back to the starting point and read some of the early masters of the genre. Science fiction is about speculation about technology and how it affects our existence. If you want to see great sci-fi I would suggest a film like Forbidden Planet which has state of art effect for its day, but is about humanity and what took much tech too quickly developed can do to a race like the human race.


Okay that is my rant on science fiction. Time to get to my interview with Aron J Anderson.

Thanks to today’s technology we are seeing a revolution taking place at the low to micro budget film level. What I have notice during the last year is that film makers have begun to move away from shooting quickly comedies and found footage horror and have turned their sights on sci-fi.


Q)The first question I hear from indie film makers is usually what camera did you shoot it with so I have to ask about the Panasonic Gh3. It is relatively new and I have to ask how well did it perform and would you use it on future projects?

A)I have had many cameras in the last 5 years, Panasonic AG-DVX100B, Canon T2i,Canon 60d, Sony 5n, Sony VG 20, I used the Canon 5d MarkII, and Canon 7d, Panasonic GH2 (hacked), and the Gh3 is by far the quickest and most enjoyable camera I have ever used. It also has the best detail in the image then all but the Panasonic GH2 hacked (Very close). I would defiantly use the GH3 camera on my next projects.

Q)It looks like this camera handled natural light very well. I see from the behind the scenes footage that you used work lights for a few shots. Many low budget film makers consider work lights as a last resort because of of the harsh light that they produce. Did you have any problems with them?

A)The GH3 has pretty good dynamic range for a DSLR. The only time I use work lights is if the location we are filming in is large or there is a lot of bright back lit scenes. In the case of Clandestine we were going to use the work lights to light the actors during the fight scene because you can see that the sun was very bright outside behind the actors and I did not want to have the background blow all the way out. But our generator died and we ended up not using the work lights. So I had to use a still image of the back ground and tracked and composited it back in the scene so it wouldn't be all blown out in the back ground. So I just exposed for the actors and let the background blow out and composited it in post.


Q)Dslr cameras and sound recording are like oil and water. What did you use to record sound?

A)This was the biggest problem for me. We only had 3 months to finish this film for a contest and I couldn't find a dedicated sound guy so I had to just record audio in the GH3 and had a friend hold the boom. So I was teaching my small crew as we went. The sound recording of the GH3 is pretty good but the location we filmed in were noise and I had to use post to really clean the audio up and that is what made the audio disappointing to me. I used the Rode video mic pro on a boom.

Q)There are a lot of special FX in this short film. Who did the visual effects work and what type of software was involved?

A)I did all the FX in the film actually I did everything in the film except the music score, I did however mix the score with all the other audio FX. For 3d I used Blender, 3D studio Max to make the 3D models or manipulate ones already made by other artist. I also heavily used After Effects with Element 3d. For Making all the audio Effects I used the Zoom H1 to capture audio then I used Audacity to creat the audio FX I needed.

Q)Watching the making of video I noticed you checking story boards. When planning a film that requires a great deal of CGI how important are the story boards?

A)Story boarding is so important. I know lots of people who film with out them and they say they don't need them, but if you want to make really good films you need to storyboards specially if you do CG or other complex camera moves.

Q)From the behind the scenes footage it looks as if you work with a very small crew. Are you comfortable wearing many hats on the set? Are you most comfortable with the camera in your hands?

A)The crew That helped me were great however they were friends of mine and they don't have much experience in making films. So I had to wear all the hats. I had to learn all aspects of filmmaking because when I started out I wanted to do so much in a film, but knew no one who knew how to do it, so I had to learn it for my self. I am defiantly most comfortable with the camera in my hands because I am DP first, then everything after that.

Q)Film makers who develop a strong following tend to specialize in one particular genre. Is sci-fi your genre?

A)I think so just because I love all the gadgets and stuff. But defiantly will film other genre.

Q)The first teacher that every film maker has is the film maker that inspired him or her to pick up a camera for the first time. Who was that film maker?

A)That's a tough one for me because when I was 16 I wanted to take pictures of beautiful California while I went mountain biking. So I was self motivated to by a Minolta SLR stills camera and learn photography. It wasn't till years later when the Pastor of my church need someone to buy and work a camera to film the Sunday service. So while I was searching the internet about video cameras I came across Phillip Bloom using lens adapter to fit on camcorders to get shallow death of field. So I guess I would have to say Phillip Bloom.

Q)After watching Clandestine one gets the feeling that it is part of a larger story. Are there other short films in the future based upon these characters and situations or perhaps a feature planned?

A)Yes it is a big story and I planed on making a part two, but then I decided just to re due Clandestine the way it should be, but I need a bigger budget. So I'm going to see if I can get funded for a feature film, if not then I will just make a part two in the same low budget way I did the first one.

Clandestine Behind The Scenes from Aron J Anderson on Vimeo.

Q)Every film maker who spends any time looking at what is happening at the low budget level usually comes away with a wish or two. As in Tarantino wishes that film makers would do melodrama like they did in the 1950’s. I have a boat load of wishes. I wish that we could bring the Western back. What do you believe is missing from the film making landscape?

A)What we don't need is more alien movies. I would love to see more historical drama action movies like Last of The Samurai.

Q)What is your next project?

A)I do lots of filming for other companies for documentary and corporate work and I'm always filming personal videos of nature and the world around me but as far as short film I have Clandestine 2 and two more movies that I'm writing now neither are sci fi.


Again I would like to thank Aron for doing this interview and you can find more examples of his work and some great DIY tutorials by him at Vimeo.

Posted by rodney cannon at 6:21 PM