The is the second part of my interview with Iyin Landre, the film maker behind Me + & You.
If you would like to help with her Kick starter campaign you can do so by  clicking here . 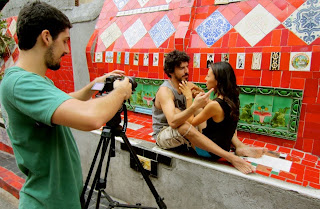 Q8. You wrote the script. There are a lot of ways to write a script. Some start from a outline or even a narrative story and then craft the script. Others just sit in front of a blank screen and do not stop writing until the rough draft is done. How do you approach the screen writing process and how long did this script take to write?

A8: I actually finished writing my first draft as a result of taking a screenwriting class. The first week we went in with a logline – mine was, “An American girl travels to Brazil and some f**ked up sh*t happens.” After that, I wrote 10 pages a week and in a couple of months I finished the script. I would say that my writing style is to have a basic outline in terms of major story arcs, but I usually just write according to how I feel the scenes should flow.


Q9: Hollywood prides itself on diversity. Film makers looking at the industry town from the outside would point out that they may achieve diversity in the form of cast and or crews at times, in thought and content it is still a industry built upon types and type casting. There are films that will never get made, stories that will never be considered and actors never hired because they do not fit the world view of what they believe will sell.

For the first time since Jackie Chan did Rush Hour (and his part in that film fit perfectly with the type casting that the Industry does) a major studio summer release had an asian actress, Rinko Kikuchi, as the co-lead and that movie was Pacific Rim. A film directed and produced by one of the world’s greatest film makers, Guillermo del Toro, who has never officially worked inside the Hollywood system so he did not get the memo saying that casting choices like that are not done around here.
You are an Asian actress in Hollywood, would someone from your background ever had been considered for the lead in a film like your's even if it was specified in the script?

A9: I think if I were an already established actress with some clout, then yes, my name maybe would’ve been thrown in the mix. But since I’m not, the possibility of me being cast in my own film was probably slim to none. But to be frank, there just aren’t many Asian or Asian-American actors playing lead roles in films outside of Asia. I remember reading an article where Lucy Liu (our most notable actress) said that she’s not approached to play the lead in romantic comedies because people don’t see her in those roles, like they do Julia Roberts or Sandra Bullock for example. In my opinion, I think we need more Asian-American filmmakers, more people behind the scenes writing, directing, producing films in order to see change. You can’t just complain of seeing stereotypical portrayals in the media and not do anything about it – because to instill change, you actually have to go out there and create new images, stories to replace the old ones.

Q10: If the parts are not being written or casting directors are not willing to consider all types as being equal options for any given role is it going to be up to actors to create roles for themselves?

A10: I can’t speak for other actors, but for me it’s always been the case. I wanted to do more than play the Asian masseuse with an awful pan-Asian accent, or even play the doctor or lawyer – I wanted to be play dark gritty characters with depth, complexity, characters that dove head first into danger, action. And seeing as how I was rarely called in for roles that excited me to that length, I realized I had to write them myself, for myself.

Q11: Have you decided on the camera and the equipment that will be used on this production? Have you settled upon a DP?

A11: Have been looking into cameras that will fit my budget – may do the Red Scarlet, and also have a Black Magic 4K or Mark III in tow for scenes in the favela, for better motion and movement. Have not decided on a DP, will most likely crew up in Brazil this way I can save on production/travel costs. But the style of cinematography I’m looking for is a cross between City of God/Y Tu Mama También/Elite Squad – fluid motion mostly steadicammed or hand-held.

Q12: How much of the movie will be shot here and how much in Brazil?

Q13: Since you are an actor by trade I think that the film makers out there would like to
know what is it that actors expect from them? There are going to be productions where there is no pay or the pay will have to be deferred. Where the film maker is just starting out and all that they have is a good script and a borrowed Dslr camera. Should they approach who they believe to be the best possible actor or actress available or should they lower their expectations?

A13: Yes I say always approach who you want first. I read an article where Hugh Jackman did some student shorts not too long ago. As an actor, I expect the director to know what he/she wants, to have a very clear vision but also be able to collaborate and listen to those around him/her. But I think most of all, it’s to foster a safe environment for the actors, where you gently shape their creative expression into how you see fit for the story.

Q14: When starting work on a new project what are the things that are going to impress an actor and what sends signals that the film maker is not up to the job?

A14: I would say wishy-washiness and lack of preparation. If the film maker isn’t sure of what he/she wants, or doesn’t have a plan when we get on set – it makes me doubt the final product.

Q15: Okay back to the subject of your project. You have set a goal of seventy five thousand dollars. If you do not reach your goal the first time around will you press forward? Will this move get made no matter what?

A15: Yes we are making this film no matter what. With Brazil set to host the World Cup in 2014 and the Olympics in 2016, timing will be an important factor to the degree of “heat” on our movie – so we’re plowing full steam ahead.

Q16: It is said that you know that you are doing what you were meant to do when you feel a kind of freedom that goes beyond words. That the thing that you are doing is effortless. When you were in a foreign land, surrounded by people who spoke a language that you did not understand yet, shooting scene for your trailer, did you find that kind of effortless freedom?

A16: I hadn’t thought of the word freedom to describe what I felt, but I think that’s a very astute description. Because there were so many unknowns – the city, the language, the culture, not having a cast or crew – I really had to believe in what I was doing or else I had absolutely nothing. And in starting from zero and building from the ground up, I had to slough off any pretensions, any fluff and ask myself whether or not I could do it at all. I think in being so single-minded, it helped me to realize that I was doing exactly what I was meant to do.

Again, thank you for doing this interview Iyin. I wish you the best of luck with your campaign and the production of the film. I look forward to posting the trailer for the finish film.


Okay guys I am going to be taking a few days off from posting. I have a ebook to edit. I think that the up coming posts will be about using your own social media to help market you work. The other post will be on the topic of how many independent film makers narrowly define being indie as having to fit into certain categories. By far the most success indie film maker of the last eight years is not mention much or show much respect by the larger indie universe. Think about who I could be talking about, I bet that no one guesses right.


That is it for today guy, thank you for visiting and please take a moment to share this post with a friend and to stumble us on stumbleupon.

Posted by rodney cannon at 2:55 PM