From Trailer to Feature, Me + You, Interview Part 1

From Trailer to Feature, Me + You, Interview Part 1

There are a lot of ways to approach raising money for your first feature film.
Crowd funding has become one of the most popular ways. Most of the films that I have spotlighted here and film makers that I have interviewed have gone through the crowd funding process during at least one level of production. 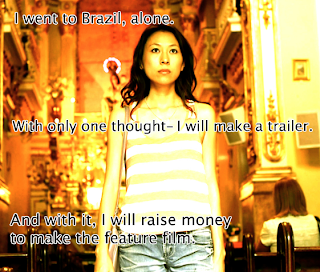 One of the more popular ways for digital film makers to begin the crowd funding process has been to shoot a quick trailer to show what they have in mind and to show off their qualifications to get the movie made. The campaign for the movie “Me + You” for me at least stood out amongst many others that had chosen this path. The actress/film maker, Iyin Landre, dropped everything and headed off to the country where her film is set, Brazil, to shoot the trailer. The idea of traveling to a location where we do not speech the language to pull together a crew and to work with people that we have never met before would be more steps than most of us would be willing to take when working on our first feature.

If you want to know more about what was involved and to get involved in her Kickstarter campaign you can do so by clicking here.  This year I have highlighted about half a dozen crowd funding campaigns and the cool part was that each of them had different financial goals and for different aspects of the film making process. Some were for post, some for general production and some for the entire production. The ones that have reached their goals did not do it all from first hand involvement. The person who visits and reads about the campaign is not usually the one who donates. The money usually comes from shares. Your involvement does not have to be cash. Post a campaign on your facebook. Share it on twitter and Google Plus. However many people that you are directly connected to you can times that by ten through the reach of your social media. If you like a campaign then take a moment to hit that share button.

Okay let's look at part one of my interview with Iyin Landre.

First I would like to thank Iyin Landre for agreeing to do this interview about her film Me + You, and the Kickstarter campaign for it.

Thanks for reaching out Rodney, great to have people like you blogging about independent film.

A1: It’s a thriller about an American girl who travels to Brazil and falls in love with a drug dealer from the favelas.

Q2: Many low budget film makers have gone the route of shooting a great trailer for their project in hopes of raising money for the production itself. You went a step further by going on location to Brazil to shoot the footage for your trailer. Where did the inspiration for that come from?

A2: Honestly, a few friends of mine suggested that I just shoot it in LA, but I knew in my heart there was no way I could “fake” Brazil. I had been saving some airline miles for years, and after I finished writing the first draft, I realized that the only way I was going to get funding was if people saw what the movie looked like, felt like. So I decided to cash in my miles and fly down there for a month.

Q3: Did you have your shoot mapped out before you left or did you figure it all out after you arrived in Brazil?

A3: I had written a 5 page script for the trailer itself, but I really didn’t map anything out. A friend of mine passed on two email contacts, and with that I decided to just take a leap of faith and fly down there, hoping that cast, crew, everything would sort itself out. However, I remember arriving at 4:30AM in Rio and looking out the taxi window, thinking to myself -- what the hell was I doing in Brazil by myself? But every time that
anxiety swelled, I just focused on the end result—an amazing trailer that will raise funding for the feature.

Q4: I understand that you have shot a few short films, do you believe that is good prep for a feature or do you find feature film making to be a completely different universe?

A4: I think that it was decent prep. I believe with each short, I became a better storyteller, whether through the writing process, or the directing process or the editing process. At the same time, I realize I have never been to film school, but I don’t believe that everyone has to. Everyone’s path is different, and the only thing I can do is go with my gut. And right now, it’s telling me to shoot this feature.

Q5: I am going to ask you a few hat questions now. You are going to be wearing multiple hats on this production; producer, director, writer and actress. As the producer are you prepared for the times when you may have to tell the director that cuts and compromises will have to be made during the production? Every low to micro budget film producer will answer every single question the same way. “There is no money for that. Find a work around.” After about ten days of production most producers are asking is there any way that coffee grounds can be recycled. As you prep to go into full production mode do you find yourself going over ever possible way to squeeze more production value out of each and every dollar?

A5: Good thing Brazil has amazing coffee! Yes, the producer in me is already squeezing every dollar from production. And to my surprise, because of the Kickstarter campaign, we’ve already had a number of Brazilians reach out to me saying that they’d love to be a part of the film in some way, offering their services for free because they love the project.

Q6: This question goes to the young lady wearing the director’s hat. When you put on the directors hat for the first time did it feel like it was something that you should have been doing all along or was it like putting on the sorting hat from Harry Potter?

Did it take a while to get use to it?

A6: Well, the first time I directed was a short film I made in 2009, called “Homo.” With all the Prop 8 protests against gay marriage in California at the time, I wondered what if the tables were turned – what if two heterosexual lovers fall in love in a homosexual world, only to be torn apart by society? With that film, I would say I didn’t know the first thing about directing, about composition, angles, how to direct actors, anything really. But after that I took a directing class at UCLA Extension, and though still limited, it gave me a skill set, streamlined my ideas and helped me to find my directing style. And since then, I’ve directed more short films, music videos, etc. But I have to mention that I will not be directing “Me + You.” As much as I’d love to, I think it would be too overwhelming for my first feature, to both star and direct.

Q7: Who are your favorite directors?

A7: Darren Aronofsky for sure. I would say that he was my film school. I’ve been tweeting him, so if you read this Darren, call me! Also Danny Boyle with “Trainspotting,” Guillermo del Toro with “Pan’s Labyrinth,” and Asghar Farhadi who also wore many hats in “A Separation.”

The second half of this interview will be publish tomorrow. If you would like to visit the film’s website you can do so by clicking here.