The Panasonic GH1, Hacking Away 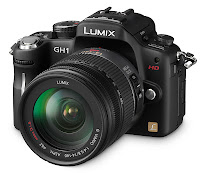 This is a pretty nice little camera that has been discontinued by the company and replaced by the GH2, which we will review in the future.

Let us get right down to it.

Is this camera in the same league as the Canon Dslr cameras?

First up is the Panasonic GH1 going head to head with the Canon Rebel T2i. I love the T2i, but dollar for dollar the GH1 can be gotten for a lower price new or used at some camera shops. I will offer up a link to at least 2 such shops.

Here is the first tutorial.

Next up is the GH1 going head to head with the work horse of the Canon family of Dslr cameras, the Canon 7d.  I thought that it would not measure up. Well guys I thought wrong. This camera takes no prisoners as it hacks away at the competition.

Okay now that we have looked at these two matches. I am going to conclude with one tutorial on hacking the GH1, but before I do that just keep in mind that the camera is not as important as the lighting. You can shoot a great low budget or micro budget film with any of these cameras. With many of the pro-sumer camcorders. Your camera is still just a tool, but it does feel nice to have a super powerful one like this camera or its big brother the GH2.

I am simply telling you that if you are going to buy your first Dslr or if you are looking to upgrade this is a camera to look at.

I know the name of this site is Cannon digital film making. The name will not change. We are going to talk mostly about shooting with a Canon. The feature that I hope to shoot before the year ends is going to be shot on Canon equipment. That said, I am going to up grade to a GH camera in the future. I will get one because there will be scripts that demand a certain look. I will shoot with a camcorder when the script dictates it. Like most things in life the situation dictates what we do and when we do it and how we do it.

Upcoming will be a post on the GH2 and further hacks.

Final thing for today. I am still looking for more trailers for my trailer park. If any of you have a trailer posted on youtube that you wish for me to add drop me a note by leaving a comment and I will probably post the trailer. Maybe even do an interview. Good luck guys and remember us on stumbleupon and google plus.

Posted by rodney cannon at 7:16 PM