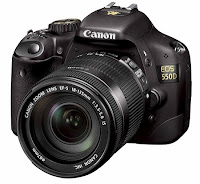 The Canon 550d or as it is commonly known as the Canon T2i has been dismissed by many micro budget film makers as being too low budget. Most would be happy to go off and shoot their movie on a Nikon or the Canon 7d or the 5d mark II, but when the T2i is mentioned it is usually quickly dismissed.

I have to remind many that the same was said about the Dslr cameras in the beginning and now they are respected by all.  I am not saying go out and buy a T2i unless that is what you want or it is all that you can afford. If you can pull the 7d or the 5d then go for it, but do not spend all of your ready cash on the camera just so that you can say look at me I got the biggest camera. Lighting will be more important than the camera. Learn how to light well and you can shoot a quality film on a Sanyo or an iPhone.  The iPhone filmmaking site is up and running check it out by visiting thephonefilmmaker.info. I also have promised to do a post about making a movie with a Sanyo, I am still gathering information, if someone out there has some Sanyo camera info please drop me a comment.

Back to the Canon T2i. I just saw a trailer for a feature that was shoot in Australia using this camera. It’s an action film that was shoot on a budget of about 25,000 dollars. I would like to say well done to the makers of the movie Deadtime. Please take a minute to watch the trailer below.

Okay if you are more interested in shooting with a Canon T2i you can do this with the bare camera and get okay footage, but I would suggest enhancing your T2i with a firmwire update called Magic Lantern, it takes your 600 dollar camera and makes it almost the equal of its big brothers the 5D and 7D. Okay here is a look at what Magic Lantern can do for you.


Good luck with your digital feature film project and remember to stumble us on Stumbleupon and recommend this blog to a friend. Okay that is it for me, I have to go. Comic Con is in my city this weekend and I need to get going. All 5 Star Trek Captains are here and Bruce Campbell and the reason for me going Jeri Ryan. Seven is my favorite number.

Posted by rodney cannon at 3:48 PM