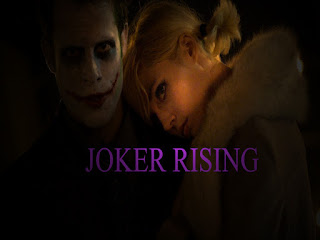 I promised that I would try to get an interview with the maker of a fan film and
Alek Gearhart the writer/ director of the fan film Joker Rising has agreed to answer a few
questions about his film. Before the interview begins I would again like to remind you guys
that Alek is running two crowd funding campaigns for this movie. One at Indiegogo and the other at Kickstarter. So please take a moment to visit kickstarter at
http://www.kickstarter.com/projects/834459535/joker-origins-film-dc-batman-universe and or the indiegogo campaign at http://igg.me/p/399595

In the world of crowd funding every dollar counts and as little as a dollar can make you part of a special project. If indie film makers do not support each other then we will always be at the mercy of the big studios. If you can not donate money, then share a campaign through what
ever social media that you use. Stumble it, post it on your google plus, use twitter. Telling a few
friends about a crowd funding campaign can help more sometimes than making a donation yourself. You never know. Okay, lets get to the interview.


Thank you for your time Alek. This will be basic question and answer style.

Most of the fan films from the Batman universe seem to be based upon
Batman or Darkwing with an occasional Cat Woman short thrown in, but you
decided to go back to the beginning with the Joker. Was this a choice because he has
been over looked or because he is the character that you are most interested in?

-The idea for this Joker film came from looking at the sadness that seemed to be in the Joker's eyes, especially in Heath Ledger's version. Like there was something horrible that happened to him to make him go the way he did. In this we are elaborating on that. Another idea that inspired this was the idea that he might not have been funny in the first place but was driven to it somehow. Also you hit the nail on the head. The Joker has been overlooked as a lead character and even in The Killing Joke we don't really get to know much about him. Every villain should have his day.


You also decided to included the very popular character of Harley Quin in the film.
How big a part does this character play in the film?


-She is very much the glue of the story. The both of them are societies outcasts so really they only have each other. She is a prostitute in this working for a pimp named "Riddles". She is easily the most important supporting character in the film. Another important character not seen in the teaser is Black Mask who also provides a very important piece to the puzzle of the Joker's origins.

There are the comic books, the graphic novels, the movies and the animated series to
look to draw from. When writing the script did you use them as a guideline or is this
going to be something new?

-No, I drew mostly from other films and books like Drive, The Departed, Blood Meridian and Shame. This is from a criminal's point of view so we want it to really feel like you are in the underbelly of Gotham.


Since the reader of this blog are interested in the film making process let’s talk about the
making of the movie.


The first question that comes up from other film makers is what kind of camera did you
use on the trailer and will you be using it to shoot the feature?


-We used a Sony Nex 100 UK for the trailer and will use it for the film as well. Great for anything at night and looks a bit more like film.

The sound is great, what did you use to record it?


-The sound is recorded with the mic that came with the camera. No boom was used for that teaser. The only alteration was that a high pass filter was added in final cut.


I have read comments about your cast and how great they are. One of the hardest parts of indie film making is finding actors who can handle the basics yet alone lift your production to another level. How did you find your cast?

-The cast was really a pleasant surprise. My partner on this project, Manuel Eduardo Ramirez and I had a one day casting call and almost immediatly great talent started to come in. Katie Young, who plays Harley, blew us away as soon as she walked in. At the end of the day tho we didn't think we we're going to find a guy who could pull off Joker and him before he turns into the Joker but right at the end Dylan Hobbs walked in and stole the show. A few other actors have come aboard later who we knew or heard about through friends. Ski Carr will play Black Mask, Dominic Marsell will play Riddles and Manuel Ramirez, who is also the guy who got gunned down in the street in the teaser will play Killer Croc or just Croc in this. God was looking out for us. 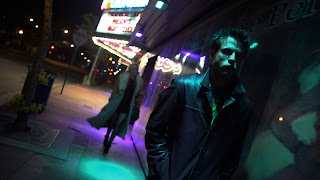 Last film making question before we get to crowd funding. Who inspires you? For me
it is Takashi Miike who does every kind of movie under the sun and does them well.
Who is it that you hope to be compared to or mentioned in the same breath with someday?


I am inspired by filmmakers like Terrance Malick, Chuan Lu (for City of Life and Death a film that everyone should watch), Steven Spielberg, Nicolas Winding Refn, and Alfonso Cuaron. Mainly Terrance Malick. Also inspired greatly by the 2004-2009 show Battlestar Galactica for taking something that is usually campy and grounding it in reality.


You are crowdfunding on Kickstarter and Indiegogo. Do you have links to these campaigns?


-We are doing both at the moment.
Indie go go is
http://igg.me/p/399595
Kickstarter
http://www.kickstarter.com/projects/834459535/joker-origins-film-dc-batman-universe

Are you determined to make this film whether you reach your goals or not?

-
The film will be made, it will just be a bit harder without help. But once it is done regardless of how we got there it will be something to behold.


When is production going to start and how many days do you plan to shoot?

- We start in June and plan on going for 2 weeks.

-We hope that this movie will usher in a new era of fan films and even comic book films that will surpass just action or sci-fi and enter into the realm of character pieces and hard dramas like the Place Beyond the Pines and Crash.